Artist Phyllis Ewen visits the Herring River that was diked in 1908 — causing destruction of a tidal marsh and much ruin of the natural habitat. 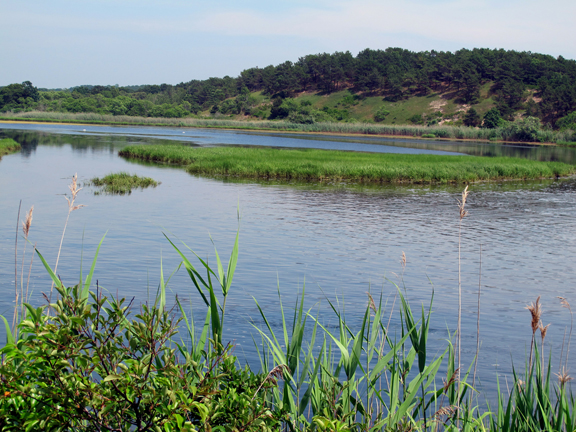 “My work has been about the politics of water for several years. I have long been interested in the ways that our imagination interacts with the natural world, a world that is never far from the effects of human intervention. In a series of sculptural drawings, I am exploring the cultural and social history of water and its role in land disputes, the development of agriculture, and the building of empire. I collage digitally printed maps, texts and images to indicate the divisions that human intervention has imposed on the world’s ecology and water supply by the use of dams, canals, and irrigation. The calligraphic elements in ink, in the collages, and in wire, represent our most precious resource and its refusal to be controlled without a fight. Donald Worster’s insightful writings have influenced some of the thinking behind this work and I am deeply grateful to my dear friends, Hugo Vergara and Rosario Parodi, of Havana. When I saw the site for World Rivers I knew I had to do a project. The Herring River estuary ran through a tidal salt marsh and to try to control mosquitoes, the river was diked in the early 20th century. Contrary to expectations, the dike destroyed the salt marsh and the mosquito population grew exponentially. There is a plan to re-open the estuary, but for the time being it is a dream. Bureaucracy, embedded interests, and lack of funds are keeping it from moving ahead. I hope that in our lifetime we will see the salt marsh and estuary restored.” 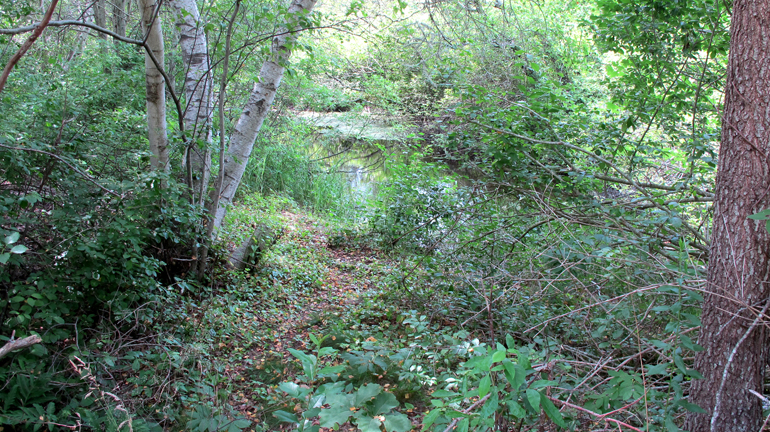 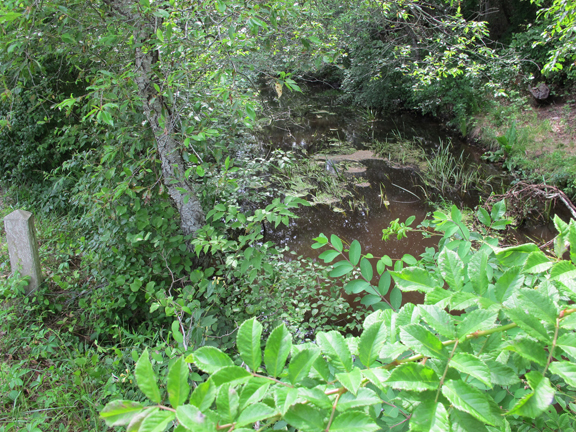 “NOTES: My husband (Jim Campen, the photographer of the events) and I climbed over a low barrier near the dike and wading in to my knees I dipped in a white curtain and it’s tie. That is Location 1 in the photos. Location 2 is further inland, where Old County Road crosses the estuary. There the river is the size of a small brook and goes through a tunnel under the road. I stood on top of the bank and dipped the curtain here as well. At each crossing, the Herring River Estuary Sign is posted as it is at the dike. The dike cuts the river off from Wellfleet Bay, just to the East of Great Island, Wellfleet.”

The Herring River estuary in Wellfleet, Massachusetts is being considered for restoration. More than 100 years ago, the 1,200 acre salt marsh system was reduced to 7 acres. Upper reaches of historic Cape Cod tidelands stretch four miles North into the town of Truro. During the past 100 years, the ecological values of the salt marsh have degraded. Upland vegetation began invading the flood plain. Lack of flushing contributed to low levels of dissolved oxygen. Acidic conditions supported mosquitoes and high levels of bacteria. Fish kills and routine closures of adjacent shellfish beds eventually received attention. In August of 2005, a Memorandum of Understanding (MOU), between the town of Wellfleet and the Cape Cod National Seashore, detailed the process for considering restoration.