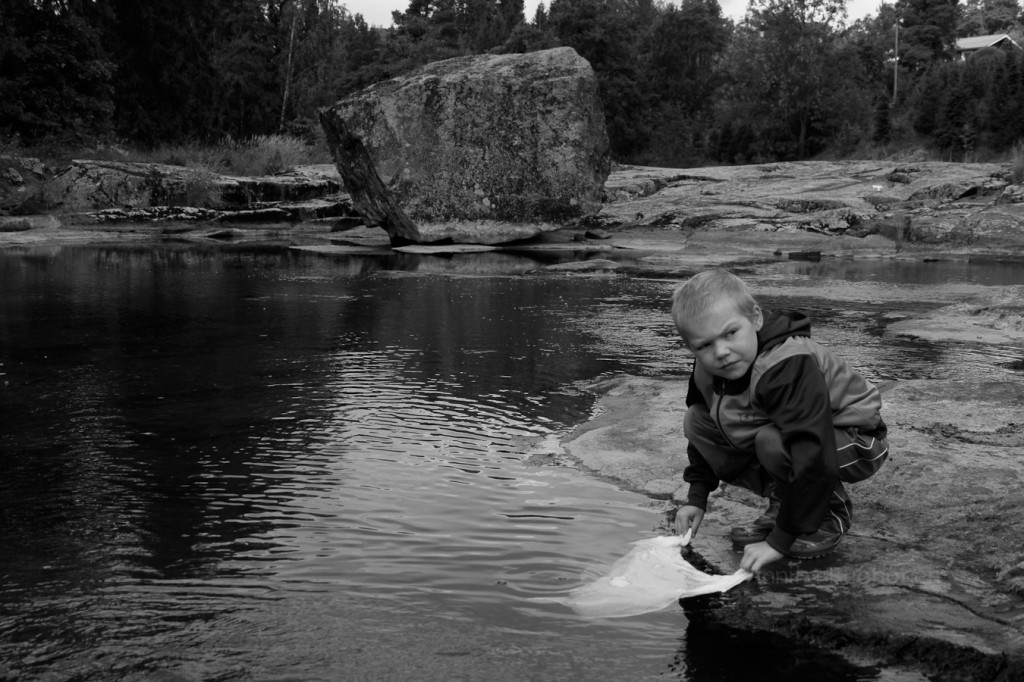 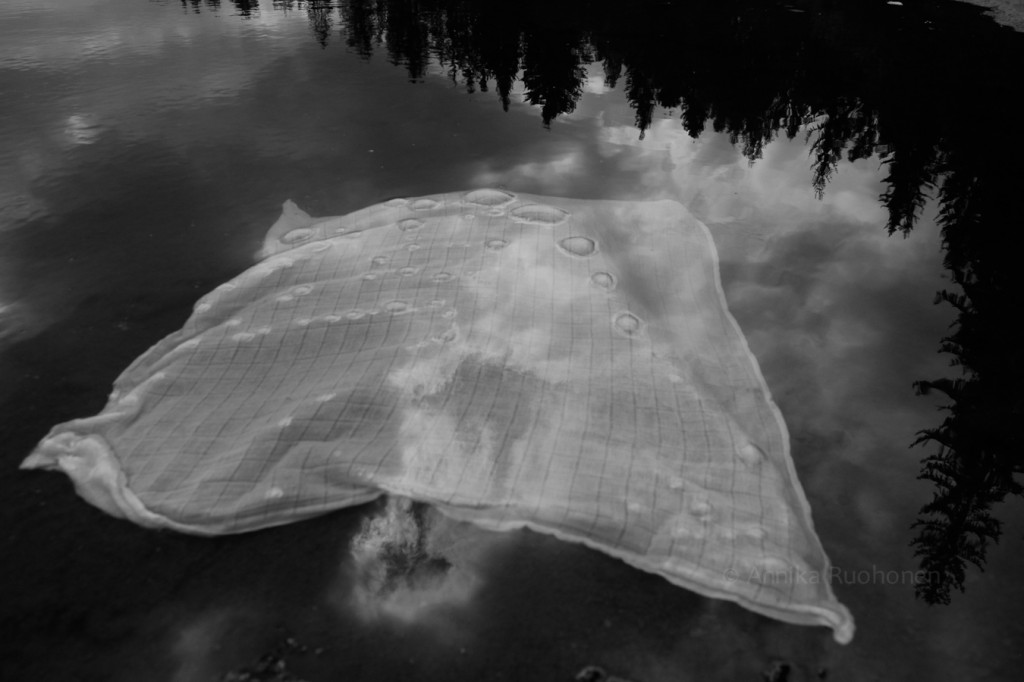 PausePlayPlayPrev|Next
This cloth was dipped into Mustijoki which is a small river in the southern Finland, flowing between the city of Helsinki and town of Porvoo. I took my 7-year-old son with me to do the dipping, he has just started 1st grade. It was a beautiful day, the rapids were almost dry. — Annika

Photographer Annika Ruohonen, read her “One of World’s Rivers” essay and see more beautiful photography on her website. 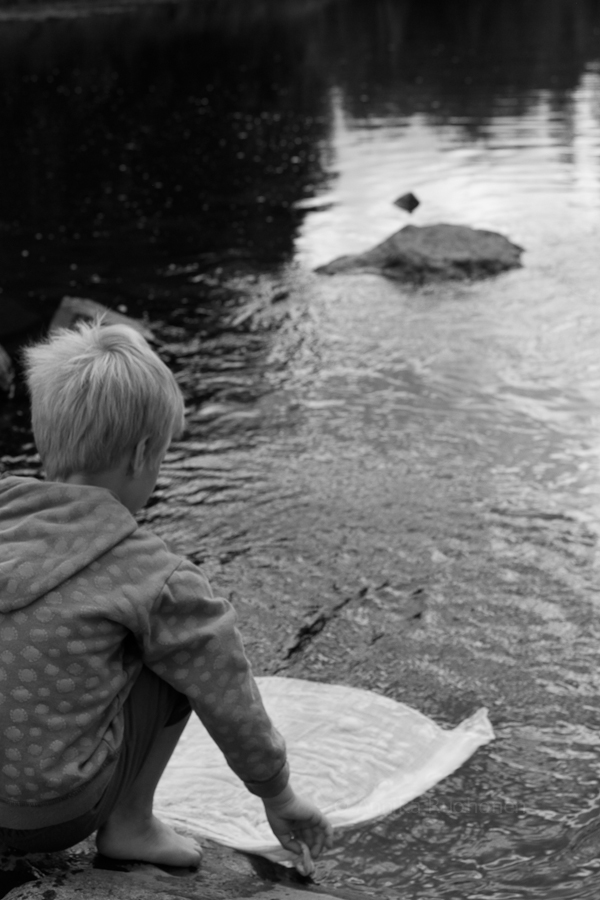 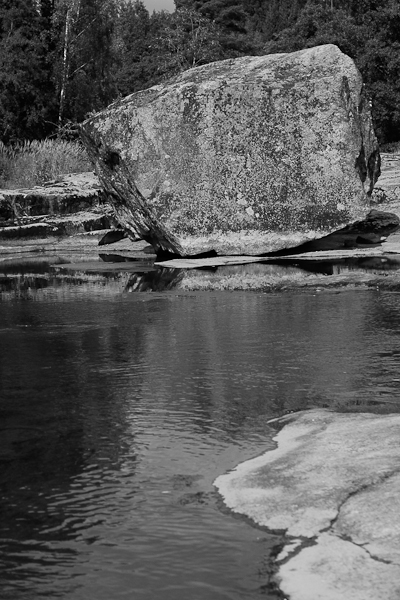 One evening creatives Tuomas Korkalo, Ninni Sintonen, and Jeff Huebner take white fabric to the Imatrankoski Rapids show (the opening of the dam.) 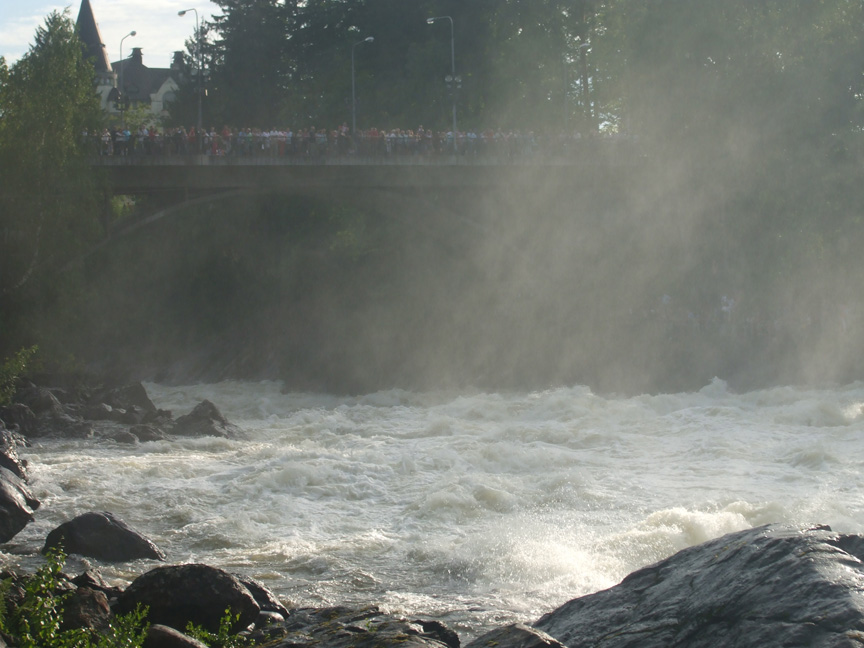 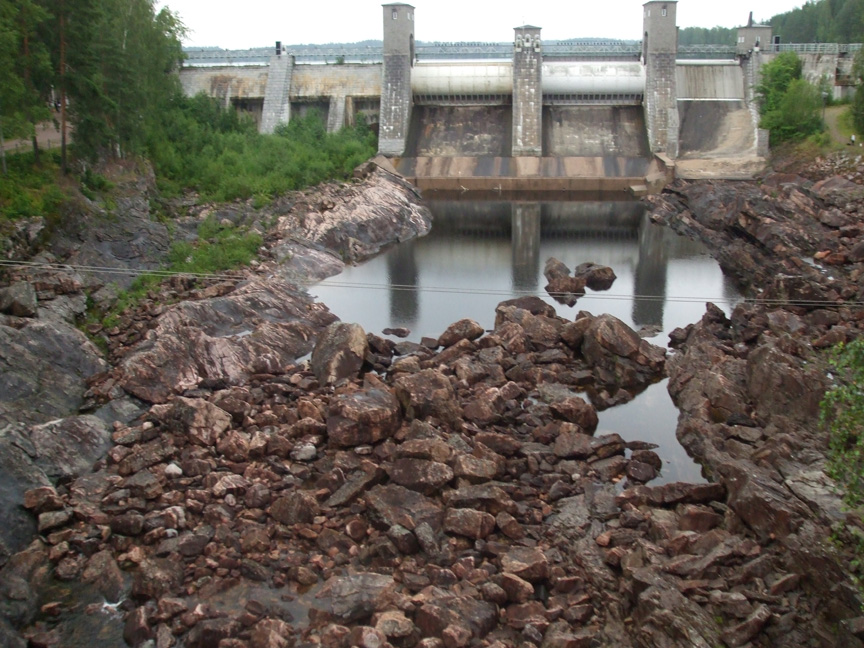 The Vuoksi is Finland’s most voluminous river, and for centuries its Imatrankoski, or Imatra Rapids, were the country’s most spectacular natural attraction and tourist destination. They are mentioned in the Kalevala, the Finnish national folk epic, as the North’s mightiest waterfall. In 1650, in the first historical and geographical study of Finland (then part of Sweden), professor Michael Wexionius wrote: “The roar is so deafening…Rocks tremble under one’s feet and trees shake on the riverbanks. Watching the fast-flowing water makes the spectator feel faint.”

During the late 18th and 19th centuries (when Finland was a Grand Duchy of Russia), Imatra was a fashionable playground for Russians. Members of the imperial family like Catherine the Great, the intelligentsia, and later the middle class regularly traveled by carriage, train, and boat to the once-remote site, located in Karelia in southeastern Finland by the Russian border, a mere 100 miles from St. Petersburg. At the turn of the last century, some 20 hotels and inns sprang up in Imatra, which saw up to 14 trains a day from the imperial capital. The “fantastic, terrifying, and beautiful” rapids (in the words of one visitor) became a symbol for wild, primitive, and mythical Finland (a place where the forest gods still lurk just beneath the modernist surface), although by 1893 a bridge had been built across the falls and colored floodlights illuminated the foaming surge. There was nothing else like it in Europe.

Throughout the 1890s during the period of “Karelianism,” artists, writers, and scholars celebrated the region as the last remaining center of an authentic “Finnish” folk culture – a place where national identity emerged through art, myth, nature, and landscape. Among these figures was the great Finnish National Romantic painter Akseli Gallen-Kallela, who captured the rapids in a dozen paintings in different light and seasonal conditions (the most iconic, called Imatra in Winter, hangs prominently in the Ateneum, the Finnish National Art Gallery in Helsinki). For Gallen-Kallela and other artists of the Finnish Golden Age, the Imatra Rapids represented not just unharnessed power and beauty; they were also allegories of Finland’s desire for freedom. Their images helped to forge a liberation movement.

Finland declared independence in 1917. The young nation needed energy. By 1929, the state dammed the Imatra Rapids and built what is still the country’s largest hydropower plant. The “downtown” of Imatra — an oddly sprawling, 120-square-mile town of 32,000, built from a general plan by famed architect Alvar Aalto in the late 1940s — is still dominated by a deep, dry, rocky gorge, steps away from a pedestrian mall. But every night at 7 pm during the summer, and at other special times, hundreds of people line up on the bridge and along the riverbanks in Crown Park to watch as the dam unleashes raging torrents of water during a 20-minute “Rapids Show.” It is accompanied by the stirring music of Jean Sibelius – “Finlandia,” “Karelia Suite” – playing over a public address system. While it may be a wondrously kitschy nationalist spectacle, it also illustrates that in Finland art is as much of nature as it is as nature, and nature despoiled. (While scenic, Imatra is notorious for its pulp factories and industrial pollution.)

I immersed a locally store-bought cotton fabric with Imatra-based artists (and partners) Tuomas Korkalo and Ninni Sintonen about a half-mile downstream from the dam, near where the diverted channel meets the main course of the River Vuoksi again. It was a rainy night, the rocks in the river were slippery, and we initially found ourselves near a sewage pipe. But Tuomas and Ninni, who help manage the Oranki Environmental Art Park in western Lapland, were good sports. They were dressed up for a night out at the 100-year-old Buttenhoff restaurant, a Karelian classic–we had beer and coffee–and they really had no idea what I was getting them into. — Jeff Huebner